In Paul Graham's essay and talk, "Frighteningly Ambitious Startup Ideas", [1] he references this line from the film Being John Malkovich: "Here's the thing: If you ever got me, you wouldn't have a clue what to do with me." That's exactly how I felt when I had my idea for solar energy, hence the naive mistakes I've made along the way. Thankfully, those mistakes emphasized the problem I'm currently working to solve. Meanwhile, if my solar energy idea really is a helpful innovation, those who are already in a position to build and improve upon it should do so as soon as possible. Likewise, if the idea can be proven wrong, the earlier the better. I'll be glad to have learned something new, but more importantly the idea will not waste anybody's time. Perhaps, even if it is a bad idea, it will spark a better one in the mind of someone reading this. Without further ado, here's my solar energy idea:

Part 1: The first problem it aims to solve is higher efficiency conversion of solar radiation to electricity. To accomplish that, sunlight, containing multiple wavelengths, will be converted to photons of a uniform wavelength and heat from the conversion process will be converted to electricity or light as efficiently as possible. [2] Sunlight will pass through a transparent weather guard with an anti-reflective coating, and hit a Fresnel lens which will focus the light onto a second lens or mirror that collimates the tight beam. [3] The collimated light will be focused into a fiber which will input the light, on a looping trajectory of total internal reflection (TIR), into the crystalline core. 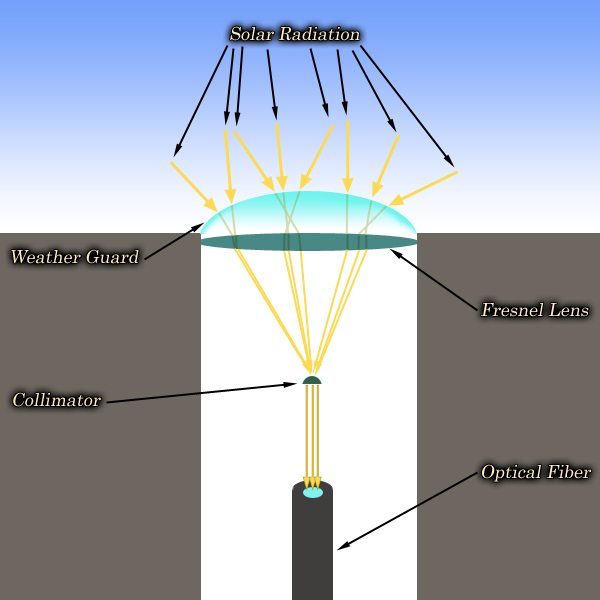 The crystalline core is a tube with a polygonal cross-section that is formed into a semi-circle. It will be made of a material that best balances cost, structural integrity at high temperatures, and transparency to all wavelengths of solar radiation. A mirror coats the inside walls of the core, and a liquid coolant is able to flow through the hollow center. Surrounding the outer walls of the core is a very thin mesh-pattern layer of material that radiates photons of a desired wavelength when heated. Holes in the thermal radiation material will be situated where most of the light in the TIR trajectory will reflect off the planes of the outer core wall. [4] Finally, a laser gain medium with a lower refractive index than the core material that emits photons of the same wavelength as the thermal radiation material will surround the crystalline core. 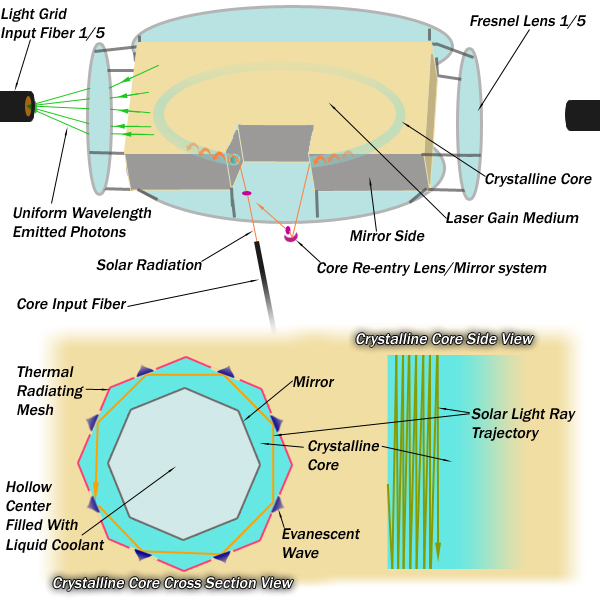 The delivery fiber will input the focused and collimated ray of solar radiation into the core. The trajectory will be helix-like totally reflecting off of each plane as it spirals through the core. Upon exiting the core, a system of lenses and/or mirrors will redirect the ray back into the entry point. Photons will remain in that looping trajectory until they have been scattered and/or absorbed into the core. [5] Each time the ray totally internally reflects an evanescent wave will propagate into the gain medium exciting nearby atoms causing population inversion and spontaneous emissions (and allowing for stimulated emissions) of photons.

The side of the gain medium where the ray of solar radiation exits and reenters the core will be coated with a mirror reflecting photons back into the gain medium. Photons exiting the gain medium through the other five sides will be focused into optical fibers made of a material that transmits that wavelength with the lowest loss. Those five fibers will input the photons (all the same wavelength) into the Light Grid.

Part 2: The second problem this idea aims to solve is storage. Everyone else seems to be focused on batteries or alternative storage technologies. To meet the same objective of continuous electricity output regardless of the time of day and weather conditions, I wondered if there was a way to route the solar radiation from areas of supply to areas of demand. Sunlight is in constant supply at all times on a large portion of our planet, but locally installed solar panels (or other solar harvesting technology) don't take advantage of that continuous supply.

My solution is a globally networked Light Grid. Collection systems around the world utilizing the technology in Part 1 will convert the sunlight into a tight beam of the same wavelength and input it into the grid. The grid's core, where the light will traverse, must be a tube of near vacuum space with a mirror coating the inner walls. [6]

The continuously supplied light in the grid will be harvested by electricity suppliers. Mirrors will temporarily direct the light into a harvesting loop. Light in the loop will be focused onto a quantum dot solar cell tuned for maximum efficiency for the wavelength of light being harvested. Some of the light that reflects off the solar cell will reenter the grid traversing the opposite direction. 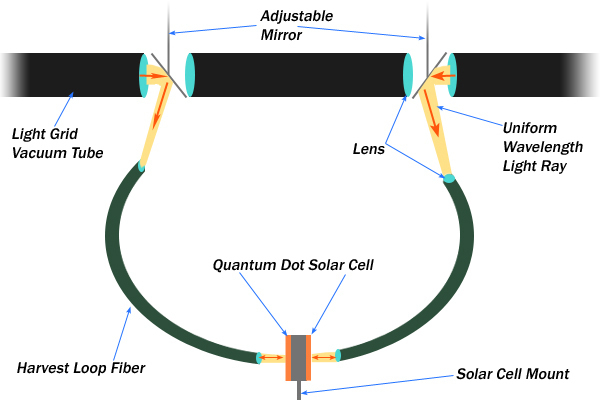 In order to maintain continuous supply in the grid while multiple systems simultaneously harvest the light, software to synchronize harvesting and multiple grid tubes will have to exist. I understand that this Light Grid system will be extremely expensive to build, but it may solve the storage problem. It would also eliminate the need to cover so much surface area with silicon (or other, more expensive) photovoltaic cells.

If you (or someone you know) can improve this idea or prove it wrong, then please do so. If this idea is a viable improvement to current solar technology, then hopefully this post will serve as prior art so anyone who wishes to use part or all of the idea may freely do so. Thank you for your time.

essay: http://paulgraham.com/ambitious.html
[2] Converting the light to a single wavelength will greatly increase efficiency when utilizing a quantum dot solar cell which can be tuned for maximum efficiency for a specific wavelength. A sterling engine, thermal radiation, or better process will be utilized to harvest electricity from heat. I haven't researched this enough to know which is best. If the electricity produced by heat exceeds the local demand, then a thermal radiation process to input more light into the grid may be a better option.
[3] If the heat is too intense, the area of the Fresnel lens can be divided into an array of smaller lenses that focus the light into separate delivery fibers and core systems. If it is cost effective and more efficient to divide the wavelengths using a prism, diffractive grating, or thin-film interference application, then the more organized wavelength groups can be input into core systems surrounded by thermal radiating meshes and gain mediums whose photon outputs are within the wavelength group. This would take advantage of the quantum tunneling photons to help pump the laser.
[4] The mesh-pattern is so that some photons radiated away from the gain medium can reflect back through and into the gain medium. Holes at the sites of TIR are there so that evanescent waves caused by the TIR can be directly absorbed into the gain medium without bypassing a buffer layer. This will maximize photon emissions pumped by the evanescent waves in the gain medium.
[5] Some of the photons will tunnel and be absorbed into the gain medium or stimulate emissions as well.
[6] The most efficient single-mode optical fiber will only transmit the photons up to ~1,500 km before they are completely absorbed.

Edit:
1) From feedback so far, I've learned that the fiber optics I'd incorporated into the system will likely absorb photons too quickly to be an efficient solution to transport focused light from an origin to a destination along a non-straight path. Instead, using mirrors to redirect focused beams within an enclosed near-vacuum space would probably be better to accomplish that objective.